Over the past few months I've been working on a top secret project. It is with great pride that I unveil this special publication by The Optics Press...

No Cameras Allowed: The Concert Photography of Dorian Boese 1976-1983

Going to concerts used to be different. The sound systems all sounded awful, the stage lighting was usually limited to red par-cans, and if you were seated in the nosebleeds of a stadium show, you better have made sure you brought your binoculars. It was awesome. It was a great time for rock & roll and it was a great time to be a fan. It's hard to believe now in the age of Ticketmaster that it used to be if you were first in line at the box office it meant you got first row seats.

I can remember going on road trips with my dad, I must have been 7 or 8 years old, just to camp out over night in front of the box office. He'd tell me stories of how he used to drive out to LA just to get tickets for a show that was still months away. Getting great seats wasn't just a way to enjoy the concert more, it was a way to make sure the pictures looked good. You see, my dad was a concert photographer. And no, not the kind with a fancy press badge who got to stand off stage at every concert and tour with the band. He was just a fan with a Minolta XD11 SLR. Back before everyone had camera-phones, if you wanted to take pictures of a band, you had to sneak in a camera. That meant getting the camera, rolls of film, and various lenses into the venue and past security. Cargo shorts definitely came in handy.

“Fill Your House With Rock 'N' Roll” That's what it said on the catalogs my dad used to send out to people interested in purchasing his photos, and it's a statement he lived by. Imagine my surprise when hanging out at a friend's house and realizing that not everyone had framed photos of Bruce Springsteen hanging up in their living room. I'm sure their grandparents were cool and everything but that old photograph they had displayed in the hallway next to the bathroom had nothing on the one of Mick Jagger hanging above our entertainment center. I sometimes wonder what the households were like of the people who bought pictures from DB Photos. Did they choose photos of artists they'd seen in the past so they could relive the show? Or did they choose photos of acts they never got to see just so they could get a glimpse of what it was like? And what did they say when their children asked who it was in the picture holding a guitar, covered in sweat, and screaming at the top of their lungs? I like to imagine it being a serious sit down talk, like when kids ask, “where do babies come from?” “Well little Jimmy, once upon a time I was listening to the radio and this song came on...”

Technology, as it's been known to do, has changed how we experience concerts. Photos and video of thousands of bands are now easily accessible online. There's an argument to be had that viewing a live show through said photos and video pales drastically in comparison to actually being there. An argument that can easily be won. Unfortunately, a lot of shows weren't documented in the pre-internet days. Since the birth of rock n' roll, the rule of “no cameras or recorders” has been a staple of concert venues worldwide. And it makes sense, especially when you look at it financially from a music business point of view. Various lawyers certainly did when they sent cease and desist letters to DB Photos. But like classic bootleg records, fan shot concert photos have an energy that's uniquely rock n' roll, because what is rock n' roll without breaking a few rules. Looking through these photos I have to remind myself that behind every iconic shot of a windmilling Pete Townsend or a hip-thrusting Rod Stewart, there's a story of a man ignoring the “No Cameras Allowed” rule, walking into a venue with a telephoto lens shoved down his pants, and photographing history. I'm glad he did. 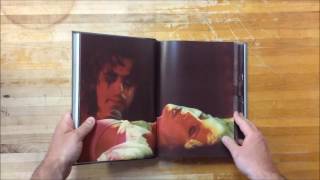